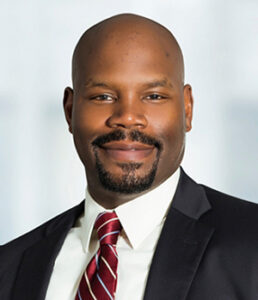 San Diego, California, August 10th, 2020 – High Tech High’s Board of Trustees is excited to announce its unanimous appointment of Dr. Rasheed Hakim Meadows to Chief Executive Officer.
Dr. Meadows comes to High Tech High with an impressive track record and a vision that sees countless students experiencing unprecedented freedom, engagement, and empowerment, as they become brave, bold, and unbound leaders in the global community. Meadows holds a doctorate in education leadership from Harvard University, a master’s degree in education from Harvard University, and a bachelor’s degree in biology from Yale University. He traveled from Boston every day for twelve years to attend public schools through the Metropolitan Council for Educational Opportunity (METCO), an organization that has collaborated with districts across Massachusetts to provide students with quality educational opportunities since 1966. “My story is a High Tech High story,” Meadows said. “I am that student who overcame odds, who had to travel far from home, who had to find a way to get a positive experience and education.”
Meadows knows that the work accomplished by High Tech High’s educators and Board of Trustees has made that same positive experience possible for its students. “I think, together, we can take it all to the next level,” said Meadows. This optimism is shared by Gary Jacobs, High Tech High Board of Trustees Chair, “Anti-bias, anti-racism, and equity are at the heart of Dr. Meadows’ core beliefs. He brings a strong and demonstrated commitment to project-based learning, and came to know High Tech High early in his career.”
Meadows’ journey in education began in the classroom as a science teacher at Cambridge Rindge and Latin School in Cambridge, Massachusetts. He was hired into a “tale of two schools,” where affluent white students received a high-quality, elite education in the school’s penthouse, while Black and Latinx students predominated the lower-track classes in the building’s basement. Determined to address this inequity after four years of teaching, Meadows became a dean in the same building. Led by the school’s principal, Meadows and nine other deans implemented a substantial redesign to break up the high school into five smaller schools. The results included more equitable distributions of offerings, de-leveled classes, and higher-quality learning experiences for all students. Spurred by this initial success, Meadows joined the Boston Public Schools team that would eventually start Lilla G. Frederick Pilot Middle School—a new school in the neighborhood where Meadows grew up. He was the first administrator hired after the principal, and together, alongside a strong community coalition, they built the school from the ground up. “It would not have happened without the residents of the neighborhood and faculty of Lilla G. Frederick rallying to push the mayor and city officials to build the city’s first school in over thirty years,” said Meadows.
Next, Meadows became the Founding Headmaster of Boston’s Urban Science Academy, where he oversaw an immense effort that, in just five years, transformed the school from one of Massachusetts’ lowest performers to the highest performing traditional public school in Boston. This turnaround proved to be a “tide that raised all ships.” Graduation rates increased substantially, special education students graduated in unrivaled numbers, and the school saw a 95 percent college acceptance rate.
Years later, while completing his doctorate, Meadows was a consultant to Boston Public Schools and led the transformation of Madison Park Technical Vocational High School into a state innovation school. The job required close negotiation and direct work with the union, district management, and city officials to garner support—no small feat. These efforts were not in vain, and the once apprehensive union teaching staff overwhelmingly voted in favor of bringing the reimagined school to life. Boston Public Schools was thrilled by these results and hired Meadows as a Network Superintendent, where he led a network district of more than 5,000 students at 15 schools.
Most recently, Meadows served as a Vice President at TNTP, overseeing the national organization’s consulting work in the Northeast, helping educators, schools, and school systems more effectively meet students’ needs. He also was a leader in TNTP’s equity innovation work, pushing the organization to become a more diverse, equitable, and inclusive place, and managing TNTP’s first team to help schools and districts do the same. Meadows also founded TNTP’s Bridge Fellowship, an award granted to “bold leaders with a history of advancing big ideas in their field,” aiming to improve outcomes and school experiences for Black and Latino young men.
As High Tech High’s new CEO, Dr. Meadows succeeds the organization’s founding CEO, Larry Rosenstock. “I want to extend a particular thanks to Larry Rosenstock,” Meadows said, “whose tireless, visionary leadership over the years has elevated High Tech High to be a model for how students learn in a progressive, innovative, and authentic way. Thank you for your service and dedication.”
It is with this gratitude—and amidst both a global pandemic and reckoning with racism—that Meadows sets his sights on the road ahead:

“Imagine leveraging technology to launch an international learning platform for kids across the country and globe. Imagine kids from San Diego not only studying the coronavirus from kids in Wuhan, but also working with kids in Senegal to share what they’re learning about the pandemic in Africa. Imagine if these students could apply those credits toward their graduation requirements. Imagine if there were High Tech High network schools in other US cities. Imagine if that network expanded internationally. Imagine if these kids’ educations could truly impact the world—not later in their lives, but immediately, in each moment of their learning.”

Meadows is both a visionary and a pragmatist who never loses sight of what matters most. “I believe in personalized learning for kids so that their cultures and identities are affirmed, so that they can choose the mode of learning that highlights their strengths and allows them to grow, learn, and develop.”
“This is the time, given the multiple challenges we’re facing in the world, for us to come together as a community and to do something that’s never been done before,” said Meadows. “This work is going to require all hands on deck—everyone together with the students at the center—as our unifying principle.”
About High Tech High Developed by a coalition of San Diego civic leaders and educators, High Tech High opened in September 2000 as a small public charter school with plans to serve approximately 450 students. Today, High Tech High has evolved into an integrated network of sixteen charter schools serving approximately 5,350 students in grades K-12 across four campuses. The High Tech High organization also includes a comprehensive adult learning environment, including a teacher credentialing program and the High Tech High Graduate School of Education. High Tech High is guided by four connected design principles—equity, personalization, authentic work, and collaborative design—that set aspirational goals and create a foundation for understanding our approach. For more information, visit HighTechHigh.org.
Skip to content