In Pompeii: Scenes of Destruction, students asked “What can you learn about the values of a society from the artifacts they carry with them into exile or as they flee a natural disaster?” 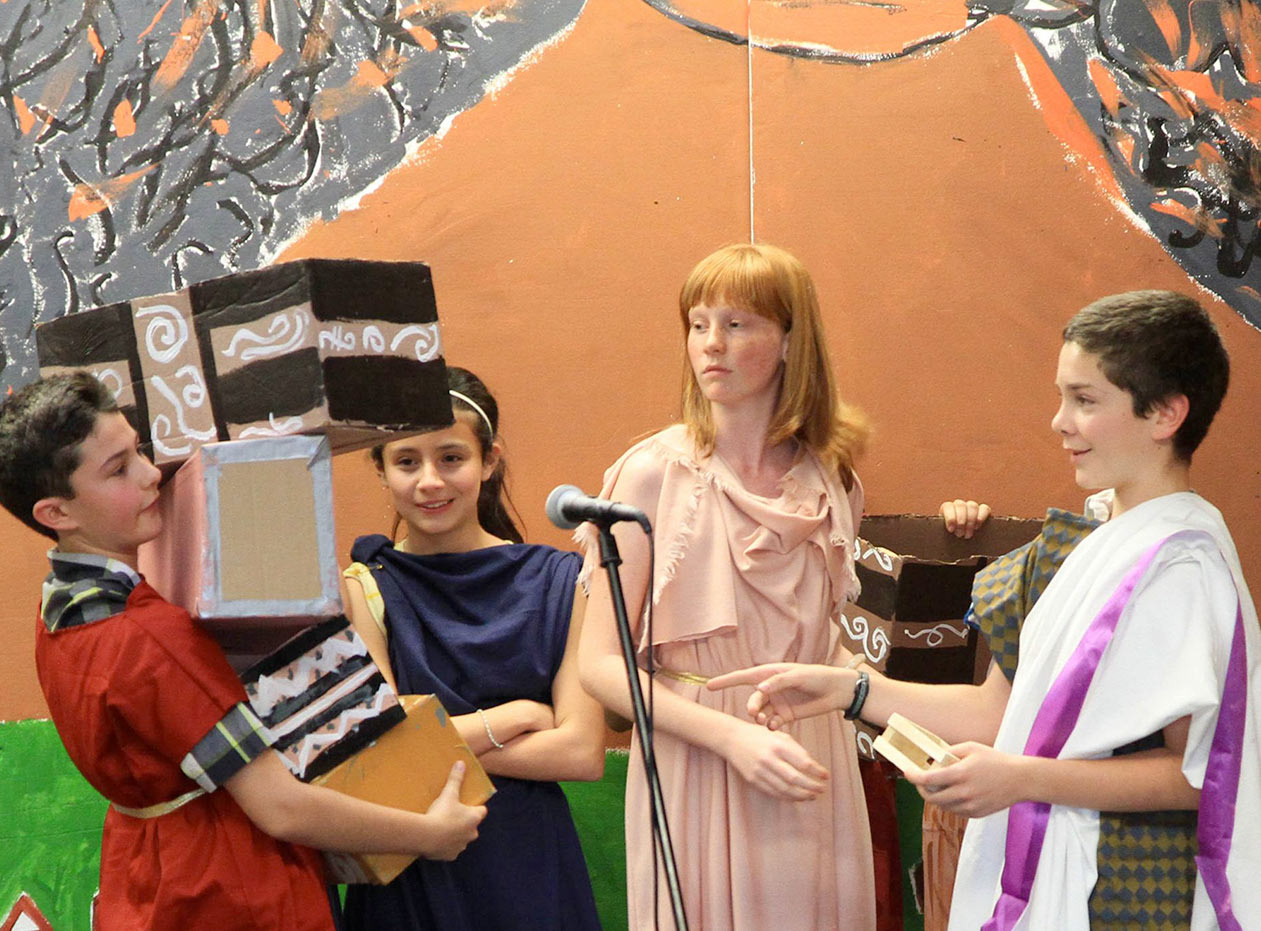 Fifty-eight sixth grade students worked for nearly three months to create original dramatic plays inspired by real events during the eruption of Mt. Vesuvius on the outskirts of ancient Pompeii in 79AD. Their plays – often tragic, yet infused with moments of humor and poignancy – were then produced, directed and performed by students in front of a live audience.

Students devoted nearly three months to the “Scenes of Destruction” project, diving deeply into individual and collective study of Ancient Roman civilization, examining topics including social class, architecture, warfare, education, gender, religious beliefs, culture and daily life. Focusing on a narrow geographic region during this specific moment in history, students explored the ways in which a person’s relative weath or poverty impacted their odds of surviving the great disaster.

Grappling with this information to understand it on a more personal level, students developed unique characters around whom they built stories of survival or misfortune. Working individually and in pairs, students then scripted thirty-eight anonymous plays (most of which exceeded ten pages in length) which were then shared and carefully read through by all students on our team. After weeks of discussion and sharing thoughtful critique… undergoing multiple revisions… these plays were then voted upon. Students were still unaware of the authorship of any play other than their own. Of the original thirty-eight plays, six were selected in a “blind vote” for direction and performance. Under the moniker “Scenes Of Destruction,” these plays were subsequently produced.

For several weeks our classroom became a hub of activity, with students building and painting their own backdrops, sewing their own costumes from scratch, and creating their own original props. Student directors ran daily rehearsals with groups of actors who memorized lines and developed emotions to take on the personae of their unique characters. Student script authors continued to revise lines and worked closely with directors to make sure that the deeper meaning within their scripts was clearly understood and conveyed.

During the week running up to the big performance, students gave multiple dress rehearsal performances to younger students in grades four and five. They then received Kind, Specific, Helpful (KSH) feedback from their fourth and fifth grade audiences and worked to enhance their performances based upon this thoughtful critique.

The “Scenes of Destruction” were performed in front of a live audience of 175 family members, friends and community members on March 14, 2013. Audience reception was positive and the actors received a standing ovation. The performance was filmed.

Later, scripts and photos from this project were added to an integrated project website (Pompeii – Making Meaning From Disaster). Plays performed were:

“The Dog of Herculaneum” by Bethany R. and Regina P.

“The Brothers of Oplontis” by Jonah K. and Paolo A.

“City Frozen In Time” by Eliana B.

“The Last Delivery” by Paul S. and Zac C.

“Roman Love Story” by Alejandra A

What can you learn about the values of a society from the artifacts they carry with them into exile or as they flee a natural disaster?

How do social class and wealth/poverty impact human survival?

What can we learn about the rise of an empire from a city frozen in time?

In Writer’s Workshop, students learned the mechanics of scriptwriting and created scripts depicting the story of the Destruction of Pompeii through the eyes of 12 different characters attempting to flee the eruption. Some of their products and deliverables included:

Through a variety of vehicles and activities, students will learn and be able to demonstrate deep understanding of the following historical content:

1. Why are the roots of civilizations often shrouded in legend?

2. What is the history of Pompeii, and why was has its destruction by Mt. Vesuvius in A.D. 79 captured the popular imagination for nearly two thousand years?

3. What would an average day in Pompeii have looked like?

4. What does it mean to be an eyewitness to history? 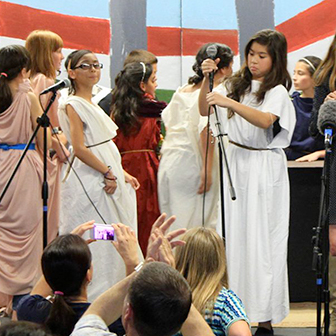 The real-world applications for our “Scenes of Destruction” Humanities project rest mainly within the world of theater. Our students learned a great deal during this project about script-writing and editing. They also learned a lot about the work that goes into creating and performing plays including: Direction, Acting, Set Building, Painting Backdrops, Creating Props, Costume Design and Construction, Hair and Makeup, Lights/Sound, Marketing and more.

This project could be extended by arranging performance in an actual theater, rather than a transformed classroom. Learning would also have been enriched with a field trip to Denver, Colorado to view the “A Day in Pompeii” exhibit that was housed there on its global tour during our project. Lastly, learning could have been further extended by fundraising for a student trip to Italy, to view the actual remains of the ancient town of Pompeii and to view the vast beauty of Vesuvius – a volcano which remains active and threatening to the region even now.

As a final note, three of our students did travel separately with their families to Europe during the summer after this project concluded and they each returned in the Fall of 2013 to describe how amazing their experiences had been walking through ruins in Italy and when looking at antiquities in the Louvre.

I loved creating this project with my students and together we experienced many, many bright spots. The “Scenes of Destruction” really pulled us together as a class. The student performances were wonderful, hilarious, full of energy and laughter. Almost all of my students said that this was their favorite Humanities project of the year!

That said, there are so many things that I would do differently if re-creating this project in the future. First, the time frame was not ultimately long enough for our students to comfortably write, memorize and perform their scripts in front of a live audience. Although we worked on this project for thirteen weeks in my classroom, this project could easily have extended for another four weeks.

In the future I plan to start teaching historical content about the subject matter in December, so that students may begin script-writing as soon as Presentations of Learning conclude in late January. I would also make different choices about the building materials we chose to use, and actively try to make more connections with the local theater community. An important field trip that we took to the Getty Villa in Los Angeles would have been more inspiring to the students had we taken it a little later when they knew more about the historical content we were studying.

For nearly thirteen weeks, our class created a project about the destruction of the Ancient Roman town of Pompeii by the eruption of Mt. Vesuvius in 79 A.D. We wrote ten page scripts and 6 of those plays were performed live.One of my most favorite parts about the Destruction Project was definitely doing the play in front of a big audience because I’m really used to being in front of a lot of people on a stage and also, all of the great progress that was done before the performance. I also really liked it when the other team came to look at our exhibition because it was fun to see their faces of excitement and I could really tell that they enjoyed it & loved all of the hard work that we put into it. And most importantly, seeing all of the great hard work that finally payed off at the end of Festival del Sol.

The biggest challenge for me during this project was when we were practicing the cup song for the end of the play because it was really tough for everyone to stay on task, let the cups be on the same beat, and to not let the cups slip out of our hands while we were singing. Something that was even more difficult was making up lyrics for our performance that would match the Ancient Roman project that we were working on, and to mix them all together by the day of the performance to make sure that we were ready and had everything done perfectly.

I really liked how all of our 3 classes were focusing on the same topic for our Destruction Project because I wouldn’t have to worry about anything else that I had to work on or memorize anything else besides the Ancient Rome project. I felt like I did such an amazing job since we were only working on one project and not having to work on 3 different ones because I would learn about this one project in all of my classes & I would have more and more to learn about it which would make me master the subject if I were to take a test on it.
Just because we were working on the same topic for our big Destruction project, it didn’t mean that we were doing them for the same subject. (Math/Science, Humanities, and Engineering & Design) I really did feel like we were doing a great job staying on task in each and every one of our classes but I felt like we didn’t have the courage to focus in all of the 3 different projects that were suppose to be perfectly done by the day of Festival Del Sol. For Humanities, we were working on auditioning for our acting roles in a play, memorizing lines, painting backdrops, creating costumes, and creating props. For Math/Science, we worked on the different types of volcanic eruptions, the way a volcano erupts, learning about how to answer Fermi questions and revising our classmates work. And in Engineering, we were working on our houses on Google Sketch-Up.
I will always remember doing the cup song with some of my classmates on stage during the end of the play because even though it was really stressful and everyone kept on messing up & got other people angry, it all payed off at the end and it was really fun getting to do that with my peers. For Festival Del Sol, I had such a great time getting to speak with complete strangers that I didn’t even know and really seeing them get very interested in what I had to say was one of the best feelings in the world. They were all very excited to know on what we were going to say to them and I really felt like we all had our right information & that our guests learned a lot on volcanoes.
One of the skills that I have really improved on throughout this project would have to be my voice skills and memorization when we had our big exhibition with all these people coming up to me and asking me questions about the project that I was exhibiting about. I really thought that my memorization skill improved a lot more since we worked on this project for all of our 3 classes so I really felt like I memorized everything that I was going to talk about at Festival Del Sol.
EXPLORE MORE STUDENT PROJECTS
Skip to content